Are politics getting in the way of science?

Do we now live in an age of ‘alternate’ facts? According to Trump presidential advisor Kellyanne Conway, we do. So what has changed? For one, the Mountain of Mendacity in the Oval Office leads the charge with a constant stream of specious claims. Not long ago, political and business leaders who wanted to confuse or derail a scientific agenda relied on once prominent leaders in science to muddle the message. A good example is the tobacco industry, which labored to deny tobacco’s adverse effects, delay legislation and then develop a coterie of its own alternate facts voiced by scientists paid to influence opinion..

He Came, He Saw, He Hugged

With apologies to Julius Caesar, Aron Ain*, CEO of Kronos, the workforce management software and services firm based in Lowell, Mass., embraces a caring and compassionate approach to managing his global team of nearly 6000. Kibitzing, celebrating, trusting and perhaps most importantly over-communicating are central themes of his first book Work Inspired. By taking a people-first approach, Ain has grown the company in 19 of the past 20 years (except 2009 during the financial crisis) to almost $1.5 billion in revenue.

You could swing a stick and hit a dozen prognosticators gassing about the future of marketing, advertising and the much humbler brethren in public relations. The swirl created by Google’s and Facebook’s omnivorous ad engines has sent the traditional ad agencies into a frenzy. What’s more, technology platforms promising hyper-targeting and precision measurement have opened the door to an AllBirds-wearing army of management consultants. Suffice to say upheaval abounds, so I was eager to see veteran storyteller Ken Auletta of the New Yorker make sense of it all in Frenemies, an easy-to-read account of the existential battle between the “Mad Men” creatives who find themselves under siege by marketing data analysts.

5 Ways to Make the Best of Client Sat Programs 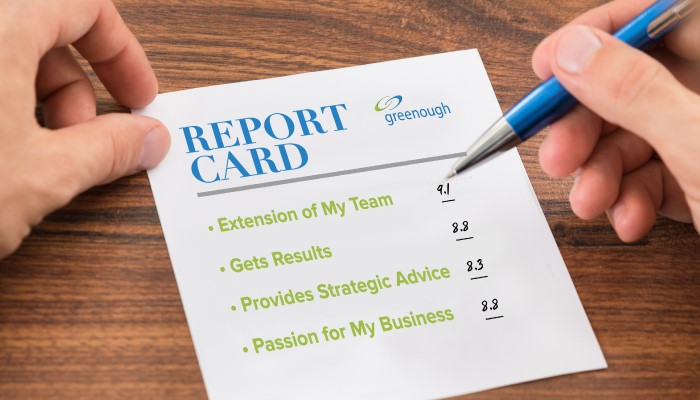 It’s hard to believe that most professional services eschew client sat programs. That’s not to say these firms don’t believe in delighting their clients. It’s just they rely on ad hoc and anecdotal feedback. And that’s simply not enough if your firm wants the most predictable path to increased loyalty, retention and referrals.

Simply put, every professional services business should develop an effective process to measure and track their clients’ satisfaction. To avoid being a meaningless exercise, that process should also include mechanisms to identify and act on areas for improvement. It’s rather simple really: what gets measured gets done. We know because Greenough has conducted annual client sat surveys since 2000, and here’s what we’ve learned over the past 17 years.

Make It Easy for Clients to Respond

A satisfaction survey has no value if clients don’t complete it. Although we’d love to get comments as well as ratings on each performance metric, we learned early on that it demanded too much of their time. Now our survey asks clients to rate their agreement with simple, first-person statements about our performance on a scale of 1–10 and to provide one summary comment with more specific feedback.

Track and Analyze Your Performance

Tracking your performance over time lets you see where you are delighting your clients, where you are improving and where you still need to improve. The 1 to 10 ratings scale we use makes it easy for us to track year-over-year performance for each metric, both by client and for the organization as a whole, and to identify how our performance is trending in each area.

Act on What You’ve Learned

Use the survey as a strategic tool to not only measure client satisfaction but also identify and, most importantly, act on opportunities to improve. We discuss our survey results with our clients to get additional insights that inform our planning process. Areas for improvement are incorporated into the plan objectives with specific action plans to address them. For example, in 2016 we:

Don’t Rest on Your Laurels

If you’re not moving forward, you’re falling behind. Use the process to continually improve your clients’ satisfaction with your services. The actions we’ve taken in response to our survey results and client feedback almost always result in higher satisfaction scores the next year.

Implementing in an annual cycle of measuring and analyzing client satisfaction and acting on the results involves a significant commitment of time, effort and, often, money. But we’ve found it’s well worth the investment.  We‘ve maintained an impressive client retention rate in a very competitive market. Many of our accounts are the result of client referrals. Our client sat scores are the ultimate validation of our efforts: for the past 5 years, every one of our clients said they would recommend Greenough.

I’ve become an avid reader of biographies in the past seven years. Some of them chronicled figures of whom I’d had some vague knowledge of before digging deeper into their stories. Others I’ve stumbled upon from recommendations and lists. Rebel Yell by S.C. Gwynne is one such biography. Gwynne tells the story of Thomas J. Jackson – or, as most know him, Stonewall Jackson. A man of great contradictions, Jackson became an icon of the Confederacy through his sheer brilliance as a military leader. Uncommonly brave and religious, Jackson was ruthless and generally not collaborative. But he saw the field of battle through a different lens. “(His) strategic innovations shattered the conventional wisdom of how war was waged; he was so far ahead of his time that his techniques would be studied generations into the future.”
It may not seem obvious, but Jackson’s ability to fashion new strategies to win numerous battles in the Civil War is a clear reminder that in far less lethal circumstances businesses need to bring creativity and clarity to the strategies they plan to adopt in 2015. Let me explain.

First, back to Stonewall Jackson: one need look no further than the first Battle of Manassas, the first big battle of the Civil War. In the face of an early onslaught, Jackson maneuvered his troops in a highly unconventional yet ultimately advantageous position with tactics no other had considered. His rout of the North served notice to President Lincoln that the Confederates were not to be simply outmanned and outgunned. Though we all know the ultimate outcome, a better strategy in battle after battle trumped advantages in numbers and weaponry.

Likewise, in far less dramatic circumstances, I’ve seen how businesses with powerful strategies learn to outflank and command winning shares. In Playing to Win, A.G. Lafley, former Chairman and CEO, Procter & Gamble, and Roger L. Martin, dean of University of Toronto, outline the critical steps to formulating strategies in markets. It begins with defining a ‘winning aspiration’ versus a plan to simply compete. Like Stonewall Jackson’s savvy selection of redoubts, it’s about choosing the right playing field — whether it’s product category or geography — in combination with a clean plan for how to win by crafting the value proposition and selecting a competitive advantage in either low cost or differentiation. There is no sustainable middle ground between the two. In the skin care category, for example, P&G successfully repositioned Oil of Olay, a mature and underperforming brand, with a broader value proposition (helps more than just wrinkles). By addressing a new market of women in the 35 plus age group, pricing the product higher to convey more value and devising a wholly different approach to distribution, they saw revenue grow dramatically from $800 million in the late 1990s to $2.5 billion ten years later. The authors repeatedly point to the need to make explicit choices. “Too often, CEOs in particular will allow what is urgent to crowd out what is really important. When an organizational bias for action drives doing, often thinking falls by the wayside.”

Quite literally on a different playing field, my favorite team the New England Patriots showed fans a whole new approach to attacking an opponent in its dramatic come from behind victory last week over the vaunted Baltimore Ravens. By employing a perfectly legal but completely unusual formation, Bill Belichick crafted a strategy that enabled Patriots’ receivers to be wide open against the Ravens’ bewildered defense. Ravens Coach John Harbaugh failed to react with as much as a time out and instead earned a penalty flag for unsportsmanlike conduct as he lashed out in frustration at the referees. Yet again, this past Sunday Belichick unveiled innovative formations and plays in the drubbing of the Indianapolis Colts; the coach and the team now move on to an unprecedented sixth appearance in the Super Bowl.  In preparing for games, NFL coaches may be the most tireless workers on the planet: they obsess about every little detail and scheme for seemingly every eventuality from an opponent. And yet with only the best teams and finest coaches remaining in the playoffs, Belichick managed to conceive of a strategy that left his opponent flatfooted, literally.

This brings me to an observation formed over 30 years in business: too many organizations fail to develop creative strategies designed to win in the market. Whether it’s a preference for action over thinking, a misguided confidence that what worked in the past will do so again, or simply a lack of capacity for strategic planning, too often I’ve seen resources squandered. Better strategy is not complicated, but it is tough because it starts with hard choices. With a disciplined strategic approach to their 2015 plans, enterprises large and small unquestionably will put themselves in position to hit their goals. And that’s a resolution for the New Year we can all get behind.