Cruise to the Edge: Navigating the High Seas of PR and Brand Journalism

When I learned from Elmore Magazine I would be covering this year’s progressive rock cruise, Cruise to the Edge, I knew the term “DIY” would become my mantra for its duration. 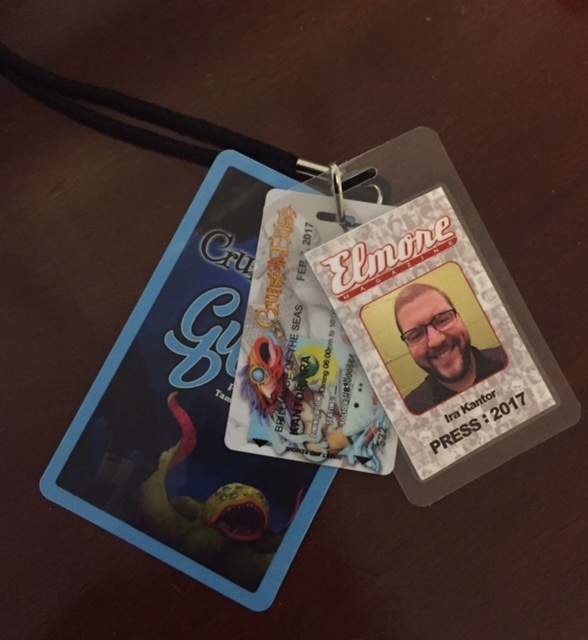 DIY of course means “do it yourself.” It’s also the name of a song from progressive artist Peter Gabriel. Even though I’d revert back to reporter status for a week, I knew, through my experiences with Greenough, that I’d have to be a master storyteller – what cruise headlining band Yes would dub a “big generator” – telling tales to grab audience attention spans through photos, interviews, social media; even by inserting myself into the narrative. While I’ve been a prog rock fan for years, the trick with this assignment was using my storytelling capabilities to get the general public hooked on the genre.

From the moment I received my confirmation numbers came to the moment we docked back in Tampa, my brain was hardwired to think in terms of features. Every scene, action, and moment could be weaved into a story – my working with PR agencies to secure musician interviews; my interrupting band meals to talk shop and get them to sign albums; my being on a four-day musician scavenger hunt running laps around the ship – the whole while thinking about how to get readers to share my work via Facebook, retweet my photos, or gain new readers in the process.

To accomplish this, I followed a DIY media code to produce more than 8,500 collective words of coverage spread out over nine individual columns, and some of the greatest photographs I’ve ever taken. As you’ll see, my stories contain highs and lows all framed by the human conditions of struggle, conflict, uncertainty and success.

As a prog rock fan, I climbed aboard Royal Caribbean’s Brilliance of the Seas with an in-depth knowledge of several headlining bands. Ask me anything about Yes, Kansas or Steve Hackett (Genesis) and you’ll have an answer back within three seconds.

But I knew I could learn more. I scoured Wikipedia pages, racked up Amazon CD purchases, viewed YouTube videos, and had friends burn materials onto blank CDs in the weeks leading up to the cruise.

A key advantage of research abilities is upping your ability to ask out-of-the-box questions. While everybody asked guitarist Steve Hackett about his time with Genesis, I thought his professional relationship with folk singer Richie Havens made for a better story. This led to Hackett himself turning storyteller – diving deep in his memory vault to recall times, places, ambiances, and events from 40 years earlier.

2. Politeness is next to godliness [a.k.a. “Only the fool learns to get through” – Steve Hackett, “Camino Royale”]

Most bands/artists on the cruise walked freely about the ship and obliged their fans with photos and signings, if asked. However, the cruise makes clear that outside of pre-determined events, any other requests made of the musicians are handled at their discretion. While I was after interviews and colorful anecdotes, I knew the story of my trying to get photos and vinyl album signatures – in as nice a manner as possible – would be fraught with both humor and questionable results.

I learned being polite has the potential to yield curtness in return, even if I wasn’t wrong in my actions. I felt horrible for interrupting Yes guitarist Steve Howe during his breakfast to have him sign an album for me. He didn’t even shake my hand. In time though, he came around. This wasn’t the easiest exchange, but I know had I prodded Howe further and ignored his request to let him finish eating, things could’ve been much worse. Either way, it makes for a great story.

3. Make pals whenever/wherever you can [a.k.a. “Lovely to see you again, my friend” – The Moody Blues, “Lovely to See You”]

While waiting to see Yes perform, my wife Jen and I met the Wolds, a lovely couple from Hickory, North Carolina who turned out to be personal friends with members of the band Kansas, best known for their hits “Dust in the Wind” and “Carry On Wayward Son.”

The plot for this story unfolded as follows: I threw myself into the narrative, telling the Wolds about myself, what I was doing, and my particular level of Kansas fandom. They told me Kansas founding member/guitarist Rich Williams was right outside the theater if I wanted to say hello. I met him (while disheveled – the classic reporter look), made my pitch, handled a humorous expletive hurled my way, and took a quick photo with him.

The story doesn’t end there. The next day, I was sitting at band’s table during lunch asking questions about their Power album from 1986. Front-man Ronnie Scott even obliged me with a selfie as members signed my vinyl copy of the album.

These moments would’ve lacked the same potency had we not met the Wolds.

A photograph is a marvelous storytelling device … even if it had been more than a year since I handled a camera for media purposes. While I didn’t particularly enjoy lugging around lenses all day, this tool was crucial to making our cruise experience one for the ages. Sure, I could easily write about what I saw onboard and how great it was. It’s quite a different animal to see it colorfully come alive through a lens.

My camera and I logged tens of thousands of steps on the Fitbit together as we captured bands of all statures on different stages. Most times I’d be 50 feet away from them but the combination of a long lens and a lot of patience yielded, in my mind, fantastic results. Like my line of interview questioning, I wanted to be out of the box with my photography, telling visual stories all the way. I wanted bands in action – laughing, grimacing, panting; anything to make the shot original and individual. Highlights include: 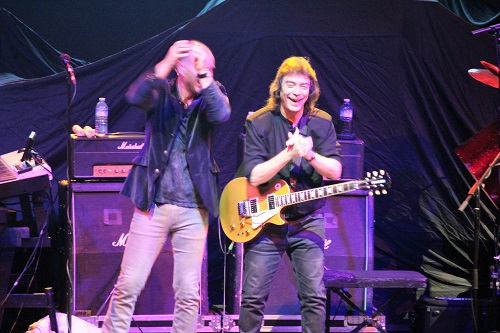 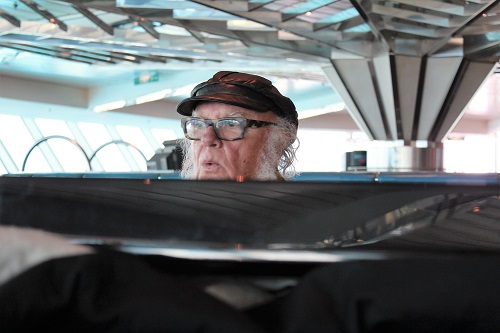 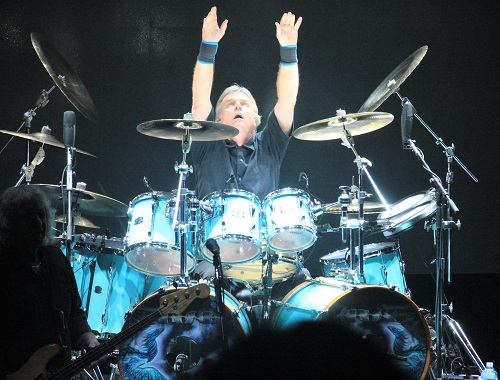 An unfortunate yet motivating factor in media is frustration. A reporter may spend all day outside someone’s home for a two-line quote and come back empty-handed, to the chagrin of their editors.

Ever story needs a conclusion, even if it takes forever to get one. A substantial portion of my time on the cruise was spent scoping out select areas of the ship to hopefully connect with bands and artists, and keep my content flowing in real time. Over four days, I must have walked the entirety of The Windjammer Café on floor 11 at least 37 times. There was also the Centrum area on floor 4. I wouldn’t always see a celebrity but after enough tries they seemed to find me.

My collective actions during this cruise could be considered foolish given I probably should’ve just basked in the sun, not letting thoughts like “What if this interview doesn’t happen?” control my brain. Yet I have no regrets, given the nature behind and content of the stories I produced.

This experience also reminded me that navigating the world of media isn’t always smooth sailing. Yet in the case of covering something of this scope, the ride proved memorable, no matter how choppy things got at times.

Cruise to the Edge Diary, Day 1

Cruise to the Edge Diary, Day 2

Cruise to the Edge Diary, Day 3

Cruise to the Edge Diary, Day 4

Cruise to the Edge Diary, Day 5