Breaking through the Election Noise

In the midst of one of the busiest weeks in this wild election season, our clients Arbella and Bridgewell broke through the noise with important stories that saturated Boston print and broadcast outlets.

March 9 marked the official relaunch of the Arbella Insurance Foundation’s Distractology program, which was founded in 2010 as one of the first programs in the country to address distracted driving with young, inexperienced drivers.  Our team secured a roster of notable attendees for a media event at Boston College High School, including Col. Richard McKeon of the Massachusetts State Police and Jeff Larason, Director of the Massachusetts Highway Safety Bureau. Despite the overwhelming coverage of the election season, and the fact that many local outlets have previously covered the Distractology program numerous times, every local broadcast station attended. WCVB, Boston’s ABC affiliate, featured a live segment on its noon broadcast while WBZ radio ran its story all afternoon including during the 6 p.m. drive time newshour. You can check out some of the media highlights on CBSBoston/WBZ Radio, WCVB Channel 5  and Metro Boston. 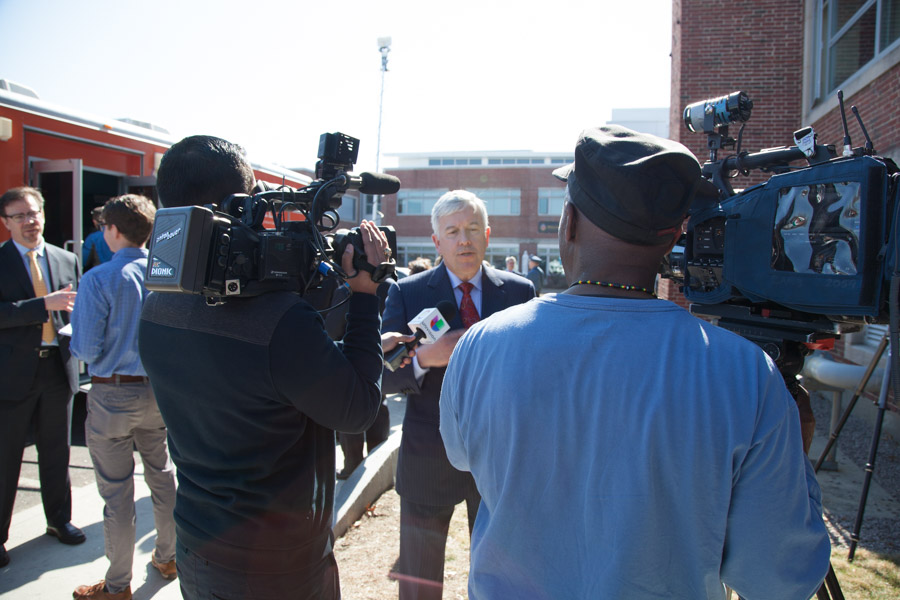 The anti-distracted driving simulator travels to high schools across New England to teach newly licensed drivers the dangers of driving without their full attention on the road. To date, more than 11,000 teenagers have completed the Distractology training, and drivers who have completed the program are proven to be 19 percent less likely to have an accident and 25 percent less likely to get traffic violations.

For Greenough, the day did not end at B.C. High. It was also an important day for our client Bridgewell and its affiliate Project COPE, which provides prevention, education and treatment services for individuals and their families struggling with substance abuse disorders. So when the Massachusetts Legislature took the first big step toward fighting opioid addiction by passing a bill that would limit prescription drug prescriptions and require schools to conduct screenings of students, we seized the opportunity to make sure that Bridgewell’s voice was heard in this important conversation. Project COPE executive director Mark Kennard spoke with numerous reporters and his commentary on the bill was featured on WBZ Radio, WCVB Channel 5, Fox25 Boston, and MassLive.

Greenough is proud to work with the Arbella Insurance Foundation and Bridgewell to help spread the word about these important causes. We’re thrilled with the coverage and recognition of these organizations’ efforts – especially in the middle of a week dominated by national political coverage.