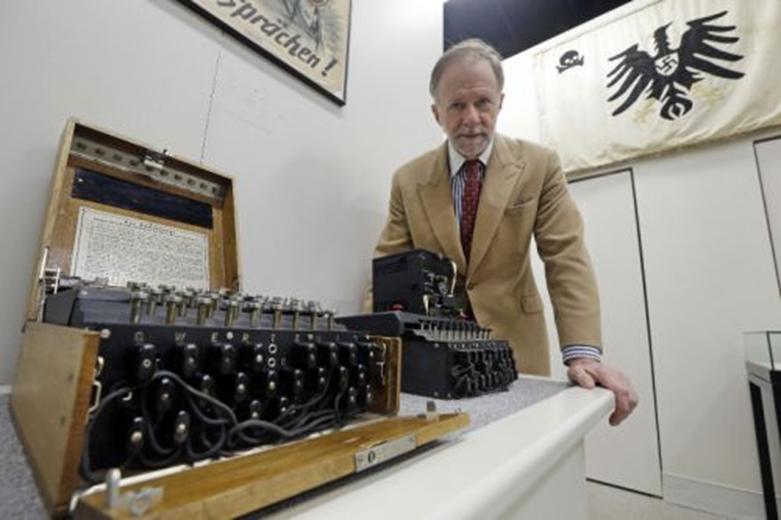 Tucked behind the Shopper’s World on Route 9 in Natick is one of Massachusetts’ best kept secrets: the Museum of World War II. The museum houses over 7,000 artifacts and 500,000 documents, making it the most comprehensive collection of World War II artifacts in the world, yet most people don’t even know it exists. Founder Kenneth Rendell established the museum in 1999 after collecting artifacts and documents for over 50 years, and describes his vision for the museum as being one where visitors can experience the reality of war. And that is exactly what visitors receive. Here you can see Hitler’s sketchbooks and watercolors, Churchill’s wartime siren suit and notes for his speeches, George Patton’s battle helmet, Holocaust uniforms of inmates and guards, the navigator’s equipment used during the atomic bomb flight to Hiroshima and an original Sherman tank from North Africa. It’s truly a breathtaking collection; Actor Tom Hanks has referred to the museum as “the holy grail of WWII museums” and the Imperial War Museum in London has described it as “The most comprehensive display of original World War II artifacts on display anywhere.”
Since the museum’s inception, Mr. Rendell has kept both the museum and himself (he is one of the world’s premier dealers in autographs, letters and manuscripts) out of the spotlight. Yet when he decided that it was time to increase the museum’s public profile, he turned to Greenough to help accomplish his goals.

There are two critical components of a successful media campaign: a great story and a timely hook. Our first campaign for the Museum of World War II had both. This past February marked the 87th Academy Awards, and one of the most talked about films was “Best Picture” nominee, The Imitation Game. The film is about mathematician Alan Turing, who worked for the Government Code and Cypher School at Bletchley Park during World War II. Turing was a leading code-breaker of German Enigma ciphers, and played a crucial role in intercepting coded messages that led to the Allies defeating the Nazis on numerous occasions. This served as the perfect timely hook; now for the story. The Museum of World War II features the largest collection of Enigma machines in the United States, aside from the National Security Agency. The machines are open to visitors’ use and experimentation, so Enigma enthusiasts can actually create and then break their own Enigma code at the museum. With these two pieces of the media puzzle in place, we began our outreach; strategically focusing on the local Boston outlets that we knew would drive foot traffic to the museum, and then expanding to a national/international campaign to raise overall awareness of the museum and Mr. Rendell.

After weeks of calculated outreach leading up to the Academy Awards, we secured a beautiful feature in The Boston Globe and a great photo slideshow in Boston Magazine; radio features on WBUR and WBZ; a television feature on WGBH; and a video and print feature by The Associated Press Boston bureau, which was picked up by over 200 outlets including ABC News, CNBC, FOX Business, USA Today and Yahoo!. The Museum was the top result on Google for “Enigma Machine” and, following the campaign, the Museum reported that their number of visitors had increased exponentially and they were busier than ever.

Once a media campaign concludes, there tends to be a sharp decrease in coverage and interest. Therefore, we made it a goal for the Museum to constantly “feed” the media, and give reporters something captivating to talk about. In July, the Museum acquired a rare Nazi telegram that was sent to Hitler by his second-in-command Hermann Goering, asking to take over leadership of the Third Reich. The telegram reportedly sent Hitler into a rage and led to his and Eva Braun’s suicide a few days later. As a result of our outreach The Boston Globe did another beautiful feature, and The New York Times plans to feature the telegram in an upcoming “Antiques” column.

Following news of the acquisition of the telegram, we swiftly moved onto our next topic: the 70th anniversary of the atomic bombings of Hiroshima and Nagasaki. The Museum houses the original operations orders for both bombings, so we again had a perfect storm for a media campaign. After strategic outreach on the local, national and international levels, we secured coverage in the Wall Street Journal, CBSNews.com, TIME.com, International Business Times, and another feature by The Associated Press that was picked up by over 45 outlets, including The New York Times, Washington Post and New York Post.

We’re now onto the 70th anniversary of the Japanese surrender and the end of the war and, with an interview with USA Today and another piece with TIME.com in the pipeline, we show no signs of slowing down. Through a strategic media campaign and thoughtful storytelling, we have successfully unveiled one of Massachusetts’ best kept secrets, and have opened the media’s and visitors’ eyes to a historic and rare collection that they never knew existed.