Twitter’s New “Buy Now” Button: the Good, the Bad, and the Ugly 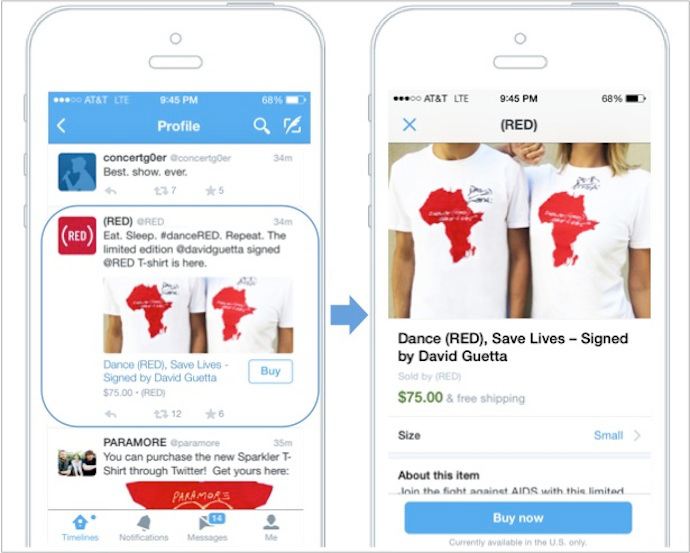 Earlier this month, Twitter began rolling out its new “Buy Now” button, which allows users to buy products from selected retailers without having to leave their Twitter feed. It should come as no surprise that Twitter is looking for ways to increase the revenue its platform generates post-IPO – and as far as social media monetization strategies go, this one does a great job providing value for both brands and individuals using the platform. Taking a cut of sales generated through the platform seems like a much better way to make money on social media than Facebook’s post-IPO strategy, which mostly consists of decimating organic reach in the hopes that brands will pay them to reach their own fans.
That said, these are still early days for the initiative, and there are a lot of ways it can go right or wrong. Here’s a breakdown of the good, the bad and the ugly ways that brands could end up using this new strategy.

Brands that live and die off impulse buys and sales have a lot to gain from this new system. In addition to their brand building efforts, companies that produce products that regularly go on sale (such as clothing companies, or even something like Groupon) will now have access to a new sales channel that requires an opt-in from the user. This means that they can offer exclusive deals, increasing the value users get from following them.

Customers love sales because they let them feel like they got the better end of the deal they just made with the company. This is why J.C. Penney’s honest pricing policy was such a bomb: consumers don’t want to feel like they just made a mutually beneficial exchange with a company, they want to feel like they just fleeced that company for all it’s worth (even if that feeling is completely fabricated). Everyone knows that almost all sale prices still make a healthy profit, but remember, it’s the feeling that counts.

The Twitter “Buy Now” button makes it easy for consumers to get that feeling, helps brands develop loyal customers by requiring them to subscribe to a branded channel, and helps Twitter satisfy investors by giving the platform a cut off the top. Everyone wins.

Social media works best as a top-of-the-funnel sales tool: it exists to help people learn about and identify with your brand. Of course the ultimate goal is that your fans will eventually transition off the platform into an owned sales channel, but pushing that process too hard can actually do more harm than good. Almost no one likes to feel like they’re being sold to, and that’s especially true when they’re using social media.

For this reason, Twitter’s “Buy Now” button has enormous potential to be used incorrectly. Companies that use the new tool explicitly to drive conversions – especially if they’re not promoting something that lets the user feel like they won, such as a sale or promotion – will likely find that their followers resent being sold to in that channel. Companies that decide to use the “Buy Now” button will need to make sure that it’s done in a way that provides value to the user first and the bottom line second.

Just as drivers can’t help but gawk at a car accident, the internet is fascinated by corporate social media faux pas. The addition of a “Buy Now” button will make it possible for social media managers to take these awkward mistakes to new heights of insensitivity. Take, for example, DiGiorno’s attempt earlier this week to hijack #WhyIStayed (a hashtag meant to be used by survivors of domestic violence) and use it to sell frozen pizzas. When I try to imagine ways that that tweet could have been in even poorer taste, adding a massive “Buy Now” button to it pretty much takes the cake.

Here’s another example: in a CNBC article on the subject published a few days ago, it was suggested that Home Depot (a company involved in the button’s pilot program) could use hurricanes and other natural disasters as an opportunity to tweet “Buy Now” messages for hurricane supplies. While this might help the company sell a few pallets of sandbags, it’s hard to imagine that the profit they gain from those sales would outweigh the value their brand loses by posting such an insensitive message. A better strategy would be to post tweets that direct people to a blog post or landing page with a helpful list of items for protecting their home during the storm. It’s still an attempt to make sales, sure, but by going with a softer sell they reduce the chance that potential customers will interpret the campaign as an effort to profit off disaster.

Twitter’s “Buy Now” button is one of the best ideas for generating revenue on a social media platform I’ve ever seen – when done right, it’s a win-win-win scenario for brands, followers and the platform itself. However, like most great ideas, it has the potential to go very wrong when used incorrectly. As with most inbound marketing programs, the “Buy Now” button will work best when it’s providing value to the potential customer first and driving sales second.