The Power of Multimedia Press Releases

A study by PR Newswire found that press releases that include multimedia content drive nearly 10 times more visibility than text. Greenough recently had the opportunity to put these findings to the test.
A couple of months ago we put out a multimedia press release for one of our tech clients that exceeded our and our client’s expectations tenfold. The release consisted of several multimedia assets, including a two-minute video and five photos. We researched and weighed the pros and cons of a multimedia press release, ultimately deciding on this option, and the results made our jaws drop.

In one week the press release was viewed 1,618 times and posted by 330 different media outlets. To date, the video has been viewed a whopping 61,275 times and the five images have received a total of 22,113 views and downloads. 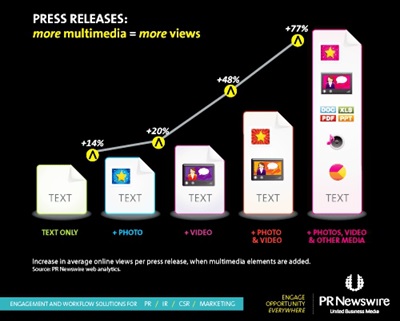 So why the great success? Data from PR Newswire reveals a number of reasons:

The findings support the fact that we live in a visual world, so being able to communicate through images is essential. We’ve learned a valuable lesson from both PR Newswire’s research, and the success of our client’s release: when your client has multimedia components available for a press release, encourage them to use them. Yes, they will cost a bit extra, but the bang for the buck through increased exposure will be well-worth the price.