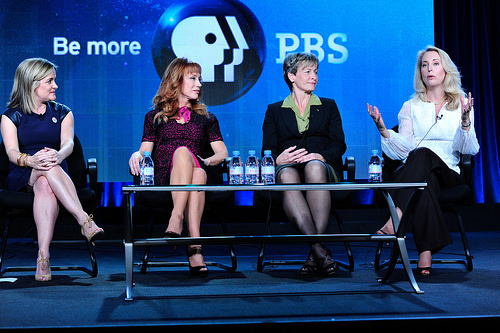 That was Gloria Steinem’s response to MAKERS’ founder and executive producer Dyllan McGee’s request to make a documentary about her life.

That “no” launched a mission to create the largest collection of women’s stories ever assembled. The MAKERS initiative, produced by PBS in partnership with AOL, compiles the stories of influential women—both well-known and unsung. The multi-platform project also hosts an ever-growing collection of more than 200 original video interviews online at MAKERS.com. More than 5.2 million viewers tuned into the 2013 MAKERS premiere, and the online videos have garnered 58 million views to date. 50% online are males.

Last month, my colleague Lucy Muscarella and I had the pleasure of supporting the MAKERS: Women Who Make America documentary series at the semiannual Television Critics Association (TCA) press tour in Pasadena, CA.  MAKERS’ six new one-hour documentaries focus on a different sphere of influence: business, war, space, Hollywood, politics and comedy. Under a time crunch, Greenough helped the MAKERS team pull together an all-star panel of representatives from the first three documentaries. Standup comedian Kathy Griffin, former CIA agent Valerie Plame, NASA astronaut Peggy Whitson and series founder and executive producer Dyllan McGee wowed the audience of TV critics with stories from space, critiques of Homeland, irreverent humor and inspiring accounts of how and why this initiative began.

MAKERS goes beyond the stats we use to describe women. It captures and celebrates inspirational stories that change the way we look at each other; that excite and encourage all of us to look at where we came from and we are going. This type of initiative has a ripple effect that significant, compelling, media content can, should, and does have.

Karen Laverty is an account director at Greenough. Send her an email: klaverty@greenoughcom.com.