Putting Storytelling to the Test: The Aaron Hernandez Case 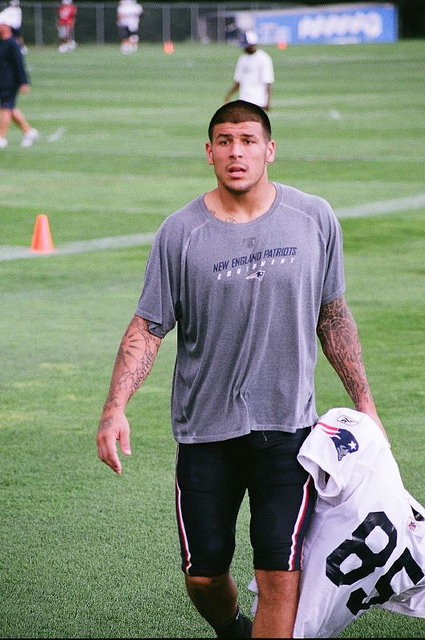 In the summer of 2012, Greenough conducted our second “Prevailing Storylines Study,” poring over ten of the most widely read publications, including Forbes, Fortune, New York Times, Time, USA Today and The Wall Street Journal, and pulling the ten most common narratives, or storylines, from each publication. We found that almost every story or event can fit into one of these storyline archetypes like “David and Goliath” or “Best Kept Secret.” However, some newsworthy events are so big that journalists will play out multiple storylines.

An example of this is the Aaron Hernandez case, in which he is accused of murdering Odin Lloyd. It has captivated the Boston market and the national media, and it has spawned weeks of coverage that shows no sign of slowing. Below is our analysis of the six prevailing storylines that can be identified within the Aaron Hernandez story.

Let’s start with the most obvious.  A rising NFL star with a troubled past seems to have turned his life around – only to become the prime suspect in a murder case.  He seemingly had everything going for him, so how could this happen?  The media has fixated on this question since the story first broke.  From local media like New England Cable News to national outlets such as ABC News, versions of this story range from purely factual reports of the arrest and the evidence to more theoretical articles that explore what may have led to this drastic outcome.

When History Repeats Itself

Immediately after a big story breaks, different facets of the newsroom spring into action.  Spot news reporters jump on the early details and investigative reporters start digging.  This is often where the “When History Repeats Itself” storyline begins to appear.  In the Aaron Hernandez case, it has manifested in two ways.  Many articles have explored his troubled past – asking if warning signs were missed, like this piece from The Daily Beast.  Others examine the criminal pasts of other past and present football stars like OJ Simpson and Ray Lewis and point out the beginnings of a disturbing trend: the rising arrest rates in the NFL.

Things Not What They Seem

Aaron Hernandez fooled us all. He seemed charming, sincere and grateful. He was the Patriots’ Cinderella story of sorts. He acknowledged his tarnished history, but said that being with the Patriots had “changed him.” Fans knew of some drug use and a few run-ins with the law when he was younger, but since his most recent arrest, a far more violent picture of Hernandez has emerged: A shooting at a strip club earlier this year, a 2007 bar fight that left a waiter with a burst eardrum and, perhaps  most chilling, an unsolved double homicide last summer. We cheered for a guy who had seemingly turned his life around. Fans were duped. Robert Kraft was duped. The entire Patriots organization says they were duped by someone who wasn’t what he seemed.

New Kid on the Block

Predictions outlining the Patriots’ fate are everywhere: Is this the end of a winning era?Five reasons to be optimistic for Patriots’ Super Bowl chances. How will the Hernandez arrest affect Tim Tebow?  As we get closer to football season, we expect these types of articles to pick up.  But even this early in the game, we are already seeing outlets weighing in and trying to predict the larger impact this case will have on sports, the Patriots and the 2013 NFL season.

What storylines have you seen manifest themselves with the Aaron Hernandez case? We’d love to hear your thoughts.