The Boston Marathon bombing occurred a few weeks ago; however, memories are still fresh in the minds of many, including us here at Greenough. Our offices are located only a few blocks away from the finish line, and we had several employees in the area at the time who witnessed the attacks or were touched directly by the horror and chaos that followed. One of them was 26-year-old Rachel Vaccari, an account supervisor who left her job in television news to join our agency just days before the tragedy happened. This is a first-hand account of her experience that day. 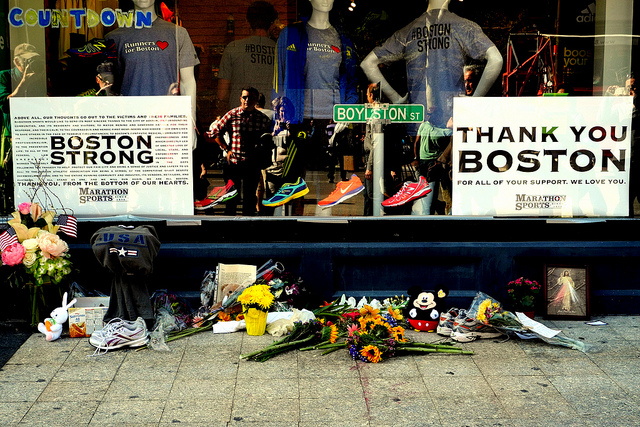 April 15th. Marathon Monday. Patriots’ Day. A day off. An opportunity to enjoy a beautiful, 60-degree day with my younger brother. A day that terrorists attacked. A day that innocent people died. A day that families lost loved ones. A day that people lost limbs but not the strength to survive. A day that brought the city, the nation, and the world together to heal.

We spent the majority of the day in front of Lord & Taylor on Boylston Street — Marathon Sports to our right, Forum to our left. We were packed on the sidewalk so tightly that at one point I thought “Geez, I hope we don’t have to get anywhere fast.”  If this had been right after 9/11 I would have thought twice about being stuck in such a large group of people, but it was eleven years later and I felt safe. The thought never even crossed my mind.

Around 2:30pm we decided to vacate our 2nd row spot along the barriers that we had fought hard to reach. We debated pushing our way towards the finish line but the crowd was overwhelming and seemingly impassable. So, we decided to walk in the other direction, heading to Towne a little over a block away from Forum. The bar area was busy. Floor-to-ceiling windows along the front of the building made it a desirable spot to have a drink and cheer for the runners. People were dancing and singing along to “Manic Monday” by The Bangles. I distinctly remember everyone joining in unison to yell happily, “It’s just another manic Monday…”

Then the ground shook. The music continued but the singing stopped. Outside of the same window where we had been cheering for runners who were only .2 miles from the finish line, we watched those same runners along with thousands of terrified spectators sprint past us in the opposite direction, trying to frantically outrun a billowing cloud of grey smoke. Some pushed into the bar to get off the street, many crying, others hugging their friends. The bar quickly became packed from the overflow of people seeking shelter. My brother and I asked each other a couple of times, “What is going on?” but we weren’t panicking, not yet. A guy next to me wandered outside and casually came back to report it was a manhole explosion. It seemed like an obvious answer and phone service was down so it was impossible to confirm otherwise. The thought still hadn’t crossed my mind that it could be a bomb.

Then a Boston Police officer stuck his head through the open, street-side window and screamed into the packed bar: “EVERYONE OUT! NOW! EVERYONE GET OUT OF THE BUILDING NOW!” Panic set in. I looked at my brother again and said, “Jeff, WHAT is going on?” By now my voice had risen with fear and it was clear to me, him, and everyone else crammed in with us that it must have been a bomb that went off, an attack of some sort, and that Towne could be the next target. I wrapped my arm through my brother’s and we pushed our way towards the exit. We got stuck trying to get through the doorway and I had flashes of what it must have been like for people fleeing The Station nightclub. As soon as we broke free, we ran, and we didn’t stop running, holding onto each other the entire time. Officers and emergency personnel sprinted past us towards the bombing site. A caravan of ambulances raced from Longwood. Soldiers who had run in the marathon rushed by to assist victims, holding the American flag high. When we got to the Museum of Fine Arts on Huntington Avenue, over a mile away from the bombing site, we finally stopped running. We were safe but shaking; our sense of security forever changed. We allowed ourselves to breathe for the first time since hearing the officer’s frantic instructions to run like our lives depended on it. We hugged, we cried. We had survived a terrorist attack. We had survived the Boston Marathon bombings.