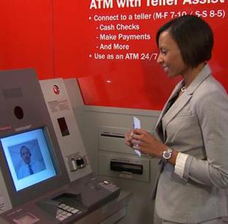 Earlier this month I read about the new video-teller ATMs Bank of America is rolling out over the next few months, starting in Boston and Atlanta. The ATMs offer live video chatting with a teller located in one of the bank’s national call centers, and will be able to accommodate a number of transactions that regular ATMs are not capable of (dispensing change, splitting a check between two accounts, etc.). BofA’s press release on their new machines announces “Bank of America Adds Human Touch to New ATMs,” but I tend to side more with New York Times Bucks blogger Ann Carrns who says it’s a touch “starship Enterprise.”

It’s not a novel concept that having a human touch and building personal relationships is valuable in banking. In the Boston Business Journal’s coverage of their “Most Admired Financial Institutions,” Boston Private Bank & Trust CEO Mark Thompson explains that developing “enduring, long-term relationships” is the key to his bank’s success. Allowing a company to manage your cash and advise your financial decisions implicitly demands a great deal of trust, and it’s far easier to trust a person who knows you and understands your background and priorities, rather than an anonymous mega-corporation.

In fact, while mega-banks are hurting in today’s economic landscape, local banks (both those technically designated as ‘community banks’ and ‘regional banks’) are on an upswing. A BBJ article published last fall reports that during the year between June 30, 2011 and June 30, 2012, Bank of America closed 13 of its 277 Massachusetts locations, while “branch closures were a rarity among the state’s local and regional players; many made no changes, while others even added a branch or two.” The article points out that most of the large bank chains in the state reported market-share decreases in the year, while a number of the local banks expanded significantly.

It’s clear why the “buy local” craze would make its way to banking. Besides building a trusting relationship with your neighborhood banker, local banks invest back into the community. When you visit the websites of Middlesex Savings Bank or the rapidly growing Berkshire Bank, ‘Community’ sections are featured prominently on the homepages, detailing the banks’ local philanthropic work and community financial support. Eastern Bank has an entire microsite – CommunityRoom.net  – where customers can easily and securely donate to local nonprofits and find out about volunteer opportunities. Nothing similar appears on the front pages of national banks’ sites. And though they may participate in charity initiatives, the investment back into their customers’ neighborhood isn’t the same.

So though video chatting a live teller might make an ATM transaction more convenient, I think BofA’s new “human touch” may be missing the mark.