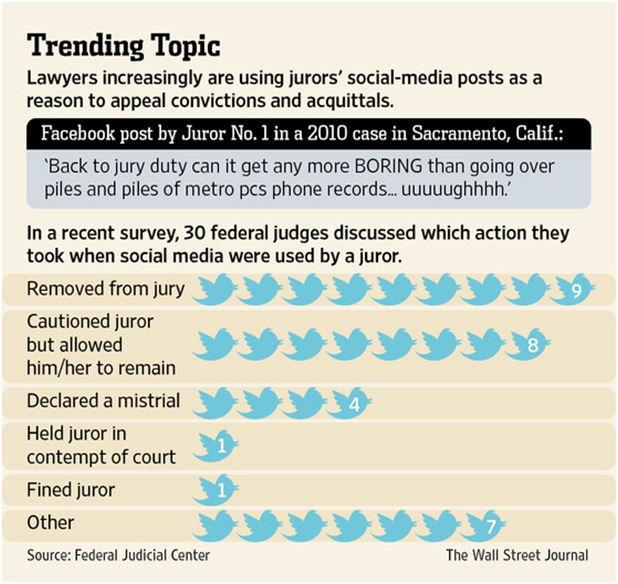 According to a recent Pew Internet and American Life Project survey, approximately 66 percent of adult Internet users say that they utilize social networking sites like Facebook and Twitter. And the evidence is everywhere. People are tweeting and posting from the sidelines of NFL games, NASCAR racecars, red carpet events, the bathroom (ew) and even delivery rooms. So it doesn’t come as a surprise that our social media addiction carries over into the courtroom.

I recently read Steve Eder’s Jury Files: The Temptation of Twitter on the Wall Street Journal Law Blog. Eder refers to a new study in the Duke Law & Technology Review where, he writes, “one juror responded to an information survey by saying ‘nothing’ could prevent her from communicating through social media during a trial.”

It is with darn good reason that courts are concerned about what trial participants (primarily jurors) might say on social media. Insider information could leak before details can be made public and biases (or even perceived biases) could be formed based on a tweet or post. Even benign social media updates could raise serious questions about whether the juror is discussing the case elsewhere and could call into question a juror’s judgment/ability to follow instructions.

Late last year, a Florida juror sent a friend request to the defendant of the trial he was involved in and he was dismissed from the jury. Sounds like a clever way to get dismissed the next time you’re called for jury duty, doesn’t it? Well this juror didn’t quit while he was ‘ahead.’ He posted this comment on his Facebook page in response: “Score…I got dismissed!! Apparently they frown upon sending a friend request to the defendant… ha ha.”

But the story doesn’t end there: His friend request, coupled with this remark, got the fool charged with criminal contempt of court and a three-day jail sentence.

While the potential impact of a juror accessing social media is huge, these seemingly small threats toward justice are difficult to detect. In a survey conducted by the Federal Judicial Center late last year, 79 percent of judges who responded said they had “no way of knowing whether jurors had violated a social-media ban.” Well, if judges don’t keep a firm handle on social media behavior during trials, you better believe that attorneys will be watching social networks like hawks, looking for even the slightest juror indiscretion that could open the floodgates to a mistrial, throwing out a conviction or an acquittal.

Before you think me hyperbolic, consider this: In 2010, the Arkansas Supreme Court reversed a death sentence in a murder trial because a juror was tweeting about the case during deliberations. In fact, the juror leaked the trial’s verdict before it was officially announced. Someone with the defense spotted the objectionable tweets.

At some point in the future, jurors may even be required to disclose their Twitter handle, Facebook page and other social media accounts as part of a “social dossier.” Until courts come up with a way to effectively manage the outbound (and inbound) streams of communication, lawyers are doing themselves a great disservice if they’re not deeply immersed in social media monitoring and staying on top of social media trends and developments.

Here at Greenough we recognize that lawyers want to be lawyers, not experts in social media monitoring, and that’s where we can help. Working together, we can ensure that no social media funny business will jeopardize the fate of a defendant…or the future of our legal system.