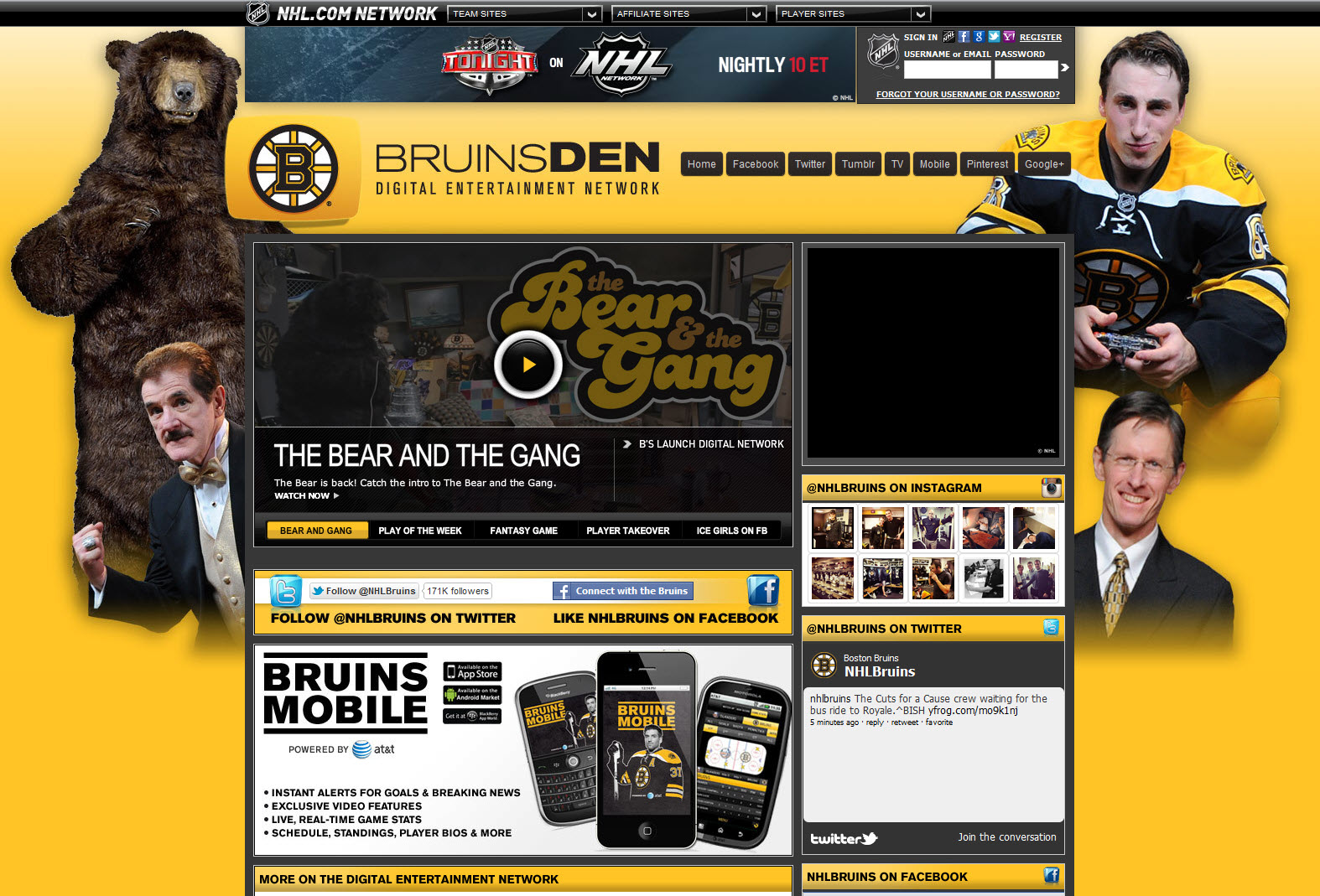 I‘m a Pittsburgh Penguins fan, so it pains me to write this. The Boston Bruins just launched a new “portal” inside the NHL.com Network and there are things I like about it and things I don’t. Mostly, begrudgingly, I like Bruin’s DEN, and here’s why:
It’s not a traditional website. I’ve said for years that websites, as we knew them, are anachronistic. Not that they don’t have value, but they are often too static, uninspired and, for the most part, are used sparingly by prospects and customers. Think digital brochure. The DEN feels dynamic and pulls in content from other dynamic platforms such as Facebook, Google+ and Tumblr. The story isn’t dictated by the Bruins exclusively – as is true of traditional websites or team sites – it’s co-curated by fans. That’s forward-looking and a lesson that is relevant to any brand in any industry.

It’s multichannel without feeling contrived. The Bruins understand that people are different, communicated differently and share liberally, especially when they are acting as “fans” (whether it’s inside a bar, outside the Garden or at a beach barbecue celebrating the Stanley Cup). Offering multiple channels for sharing different media types gives a more comprehensive view (feeling!) of what it means to be a Bruins fan.

It says, by its design, that “we do this for you,” and that builds affinity. This one’s hard for me since I don’t actually feel the affinity. A brand – or team – should feel like it’s yours. By featuring fans and making them central to the story, the Bruins make it less about the league and more about each individual Bruins fan. Is your brand connecting this way with its customers and prospects?

What I don’t like about the portal is where it features the branded content. The location of the Ice Girls and The Bear and the Gang takes a little away from the affinity-building mentioned above. I’d like it more if this content was featured less prominently than true fan content (maybe the carousel can rotate fan content instead).

The “Bruins Mobile” content doesn’t add much either – it’s an afterthought. Maybe I’m the only skeptic who sees this as just an ad for another ad revenue platform. Perhaps the Bruins can think of an innovative way to create/capture dialogue through mobile and feature that too.

Overall, this is a win; at least for now. I hope they don’t focus inward on the portal, however, but instead continue to focus outward on building the kind of multichannel engagement and affinity that makes DEN possible in the first place.