Healthcare in Your Pocket: The Unstoppable Rise of mHealth 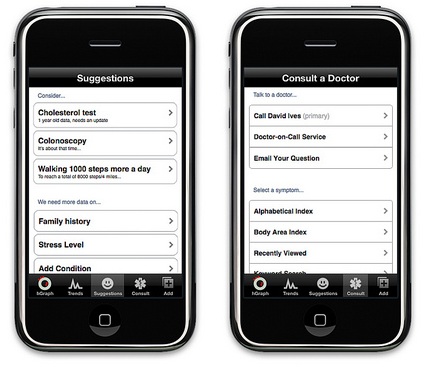 Much has been written in recent months about “consumerization of IT.” In fact, InfoWorld recently launched a channel dedicated to the topic. Overused phrase? Perhaps it is, but it’s also no buzzword du jour. Mobile devices have already liberated your “at home” persona, and now corporate IT is scrambling to protect itself as work personas and home personas converge within one or more preferred devices such as smartphones and tablets.
But consumerization of IT doesn’t capture the true potential or massive scale of this disruption.  To fully grasp that, simply insert the world “healthcare” before IT.

The title of a recently published Panasonic/BizTechReports white paper (available here) concerns me. Diagnosis Danger: Governance & Security Issues Cause IT Concerns About iPad in Healthcare Setting perpetuates fear that undoubtedly exists within many healthcare enterprises. That said, the white paper is frankly a bit self-serving; its main point seems to be that iPads (unlike Panasonic devices, of course) may not be robust enough for the typical healthcare setting.  That’s a minor worry in my opinion, but a survey done with CIOs as part of the white paper clearly shows widespread angst.

Despite these worries from within, however, true disruption is underway, and patients, physicians and administrators are driving the mobile health, or “mHealth,” revolution, whether IT is ready or not. Christina Thielst, a hospital administrator who is active in social media through her blog Christina’s Considerations, champions this opportunity by putting a spotlight on ways mobile technology, even “consumery” applications such as FourSquare, are leading to deeper engagement. She doesn’t ignore the risks, but she does encourage her peers to push boundaries.

And push they are. A recent piece in Crain’s New York Business, Wired Docs, tells of physicians who are challenging their employers to “hook them up.” And we’re not talking about mere social media dialogue on Twitter or Facebook, we’re talking about doctors on rounds using apps such as Diagnosaurus on their iPhones to troubleshoot new symptoms.

There is no putting the genie back in the bottle; whether you call it consumerization of healthcare IT or mHealth, the movement is unstoppable. Consumers want it and understand how to use it. And so do many medical professionals.

But don’t take my word for it. Take the words of U.S. Department of Health and Human Services Secretary Kathleen Sebelius at the recent mHealth Summit. Read her words carefully, especially her closing line: “This future is not here yet, but it is within sight.” That future is mobile, and those of us who have a stake in mHealth, from developers of new applications to the creators of new content to support them, have an obligation to keep pushing (and innovating) alongside the intrepid physicians, nurses and administrators who have taken up this cause. Sure, healthcare CIOs should be careful in these uncharted waters, but here’s hoping they are committed to doing so with sufficient speed to realize the full promise of mHealth as soon as possible.

Scott Bauman is an executive vice president for Greenough. Send him an email at sbauman@greenough.biz or follow him on twitter: @sbauman